Recently I was in the fabric store and I started talking to a woman about the fabric selection and naturally we started talking about patterns,things we've made and how much she admired the dress that I had on. *Thank you*. Eventually we got to talking about sewing machines that are being made now. Now mind you I have a wonderful roommate who got my my current machine for Christmas last year. But I had been looking at them mighty hard before that. She must have been watching me debate over them. As she bought me another brother machine-the SQ 9000 Click here to see the review on the machine. It's a good little machine. I've loved it for the time I've had it so far, which mind you isn't long. But it's a breeze to operate and no trouble figuring out how to thread the bobbin. Well anyways, the woman I was talking with said she bought a singer machine and couldn't figure out how to thread the bobbin, she said the book was of no help and she just got so frustrated with it she eventually sent it back with a note that said she was very unhappy with singer. She now owns and loves a brother machine. She was also talking about a T.V program where a woman was telling about the new singer and brother machine and explaining them to the public. When she got to the singer machine she couldn't even figure out how to thread the bobbin either!! And she is supposed to be a professional!! **This is word of mouth* But, word of mouth can make or break a company,especially in this day and age when we're all connected so easily but the Internet. I'd hate to see singer go under because of their reputation slipping. I mean they started the whole sewing machine revolution for us all.(BTW, I'd love to have an old treadle sewing machine)
I also have a friend who's boyfriend bought her a singer simple machine. She is a first time sewer, but she said she read the book and still didn't understand how to thread it. I'm assuming she meant the bobbin. She asked me if I knew and I didn't think I would be able to explain a machine I haven't seen. But told her that I could look at it. I think she got her BF's mother to help her with it. But the point is that I think Brother is a great company and that singer needs to step it up a notch if they hope to compete. Now I know there are other brands out there-Janome,babylock and a few others I wouldn't mind owning. They are so expensive that for people on a budget we'd have to save up for along time to get one. I only occasionally take in other peoples jobs(I just don't have much time for it)so I couldn't justify spending that much on a 'hobby'. Let me know what you think. And whit kind of machine do you use?
Handmade by Dinie at 3:59 PM No comments:

Email ThisBlogThis!Share to TwitterShare to FacebookShare to Pinterest
Labels: Costumes 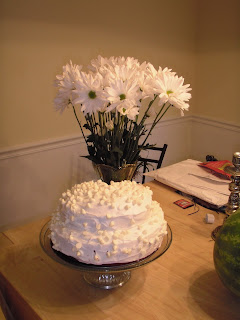 Since this is my first post of my first blog, I just want to say that I'm happy to be blogging to the world now about my work. I love to sew and to create. And to make a garment from a flat piece of fabric is just amazing to me. All the designs and choices that we as sewers have now amazes me. I first started to make my own clothes because I got frustrated with the ready-to-wear companies for not making anything that would fit me well. I'm not (as most people are not also) a generic sized person who can fit into anything and look good. I have been well endowed so to speak and as such don't have very many button up shirts and none what so ever that are flattering. I will be tackling this issue later. I'm right now working on a few vintage style dresses for myself. I'm having a little trouble learning some of the stitches on my new machine by myself, but I'll get it. I had a regular brother machine for almost 10 years no special stitches, no bells and whistles. Now I have a higher model machine and it does so many more stitches, it has a monogram stitch, a few design stitches that I've used for a top-stitching, and bunch of useful stitches that I've been doing by hand.  So far I am making fun spring/summer dresses. I've finished two of them and will be posting pictures soon. I can't figure out how to make my slide show only show what I want it to, so you'll be seeing pictures of my pets until then.
Handmade by Dinie at 1:18 PM 1 comment: